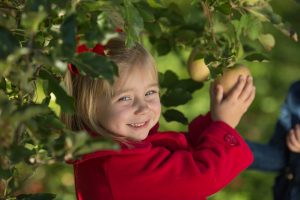 During the early sixties my dad planted two apple trees in the back yard. As time went on he set more and eventually we had approximately forty trees. My mom saw how much he enjoyed his new hobby and suggested he plant more trees. She was thinking about forty more trees, but dad brought home four hundred more! Today the orchard has approximately 15,000 trees.

We sold our first apples in 1974. That was the only product sold at that time, but as business grew we started adding other items.

We installed a cider mill in 1978. In 1987, we built a new apple house complete with bakery. In 1996, a new strain of the Gala apple was discovered in our orchard. We named this new strain the “Caitlin Gala” after my daughter. In 2001 we enlarged the sales floor of the apple house and picnic pavillion added.
Order your Pies & Cakes!
Pecan • Apple
Old Fashion Apple Stack Cakes (1 week notice needed)