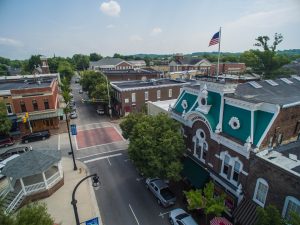 Craigmiles Hall was built in 1878 as an Opera House and Meeting Hall. Built by Walter Craigmiles on the Town Square in Cleveland, Tennessee, it was once the social center of the city. It is one of our most iconic buildings and was added to the National Register of Historic Places in 1980. See this and the rest of our beautiful Historic Downtown on a self-guided Walking Tour!

You may not know that Cleveland, Tennessee has its own song — “The Diplomat” — or that it was composed by march king John Philip Sousa. What is even lesser known is that the song was played for the first time 110 years ago when Sousa performed it at Craigmiles Hall. The Craigmiles Building now houses several businesses as well as a restaurant on the first floor. This is similar to when it was in its heyday, and the Opera House was on the second floor of the building with businesses on the ground level.

A plaque that signifies the visit to Craigmiles Hall by Sousa has been placed on the exterior entrance to the building. The plaque was presented to Allan Jones in October 1994 by Lee University President Dr. Paul Conn and the university’s Wind Ensemble, to signify Sousa’s visit to Cleveland and his presentation at Craigmiles. Renovation of the Craigmiles Building has brought the site back to its luster of earlier times, with the exterior looking much like it did when it first opened in 1878.