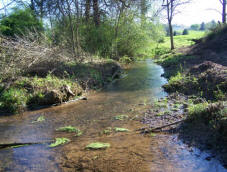 Located southeast of Charleston, Tennessee lies Rattlesnake Springs.  Rattlesnake Springs served as one of the Cherokee encampments within Fort Cass during the Removal of 1838.  It is the most famous and recognized name associated with this area.  The springs are located off Dry Valley Road on a privately-owned farm. The Cherokee Tribe used this area as they prepared to embark on their infamous Trail of Tears. It was added to the register in 1975.

Fort Cass, established in 1835, was an important site during the Cherokee removal known as the Trail of Tears. Located on the Hiwassee River in present-day Charleston, Tennessee, it housed a garrison of United States troops and watched over the largest concentration of internment camps where Cherokee were kept during the summer of 1838 before starting the main trek west to Indian Territory. The camps stretched for many miles through the valley south of Fort Cass toward present-day Cleveland, Tennessee.

The Cherokee population had been spread over a region that included southeast Tennessee, southwest North Carolina, northern Georgia, and northeast Alabama. The first stage of the removal process was to gather the Cherokee into a few fortified encampments or “emigration depots”, the largest of which was Fort Cass. Other depots were located at Ross’s Landing (Chattanooga, Tennessee) and Fort Payne, Alabama. Fort Butler served as the military headquarters in North Carolina.

Before the removal began, from 1819 to 1838, Fort Cass was the site of the U.S. federal agency to the Cherokee Nation, known simply as the “Cherokee Agency”, a kind of embassy. The Cherokee had ceded lands north of the Hiwassee River in 1819, at which time an earlier federal agency was moved to the future site of Fort Cass and Charleston, on the south bank of the Hiwassee River in Cherokee territory. This Cherokee Agency was situated on the east side of present-day U.S. Highway 11, near the intersection with Walker Valley Road. No trace remains today.

The Indian Removal Act of 1830 began the process that culminated in the Trail of Tears eight to nine years later. In 1835 the United States Army built Fort Cass at the Cherokee Agency, at the suggestion of Emigration Superintendent B.F. Curry. It was named for the Secretary of War, Lewis Cass. The fort was intended, in part, to intimidate the Cherokee into agreeing to move west (Duncan 2003: 275).

Even after the 1835 Treaty of New Echota it was clear that most of the Cherokee would not willingly leave their lands. In 1838, Brigadier General Winfield Scott assumed command of the “Army of the Cherokee Nation”, headquartered at Fort Cass. He notified the Cherokee people to prepare and submit to forced deportation.

Military operations began in the Spring of 1838 in Georgia, North Carolina, Tennessee, and Alabama. By July 25, 1838, over 4,800 Cherokee prisoners were encamped near Fort Cass, along nearby Mouse Creek, Chatata Creek, Chestuee Creek, Rattlesnake Springs, and Bedwell Springs. The initial plan was to not keep the Cherokee at Fort Cass for long and to travel by boats on the Tennessee River, but low water levels due to drought made this plan unfeasible. An overland march seemed inevitable, but was delayed because it would cause great hardship if conducted during the hot and dry summer months. The exodus was postponed until September. Therefore, thousands of Cherokee spent several months living in the internment camps near Fort Cass.

Various diseases swept through Fort Cass during the summer of 1838, such as whooping cough and dysentery. There were frequently several deaths per day.

Between the end of August and early December 1838, the Cherokee from Fort Cass and other depots were organized into twelve groups and began the march west. The last Cherokee left Fort Cass on December 5, 1838.

Today nothing remains of Fort Cass or the internment camps.