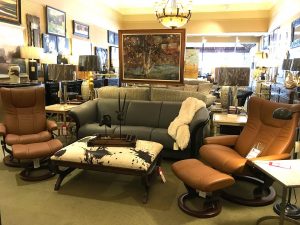 Stamper’s is proud to offer thousands of distinctive furnishings for your home and office. Located in beautiful downtown Cleveland, we carry a variety of high quality brands. Come visit us today, you won’t be disappointed!

Three generations of commitment to excellence is the underlying factor that allows Stamper’s on The Square to acknowledge over 90 years of business. The furniture and home accessories store’s success is also a story of dreams and sacrifice by the men who guided it with a firm and steady hand.

As the brainchild of Joseph Otto and Lucy Mae Stamper and her sister Lillie Kimbrough, the Ocoee, Tennessee family gave the store its beginnings on 411 Highway in 1923. When son Clarke Stamper returned from the Army in 1943, the store was already established in Cleveland. Clarke and his bride Bonita, also of Ocoee and affectionately known to Clevelanders as “Bo”, had loved being stationed in the big city of St. Louis and would have enjoyed staying on there. But they passed up the opportunity and returned to carry on the family business. Bo set to work to making Cleveland home.

In 1974, their elder son, Joe, found himself in much the same position as his father had been. Who would carry on the family business? Joe, who holds degrees in Business Administration from Vanderbilt and Marketing from UTK, left a career he much enjoyed with Magic Chef to begin his retail training under the careful guidance of Clarke. Joe married the former Mary Margaret Abel, also a native Clevelander.

It was not until 1985 that Phil, the younger brother, also holding a business degree in administration from UTK and a performance certificate from Berklee College of Music in Boston, began working in the store.

It was Clarke’s nature to spell things out clearly for his boys and he did the same for Joe where store management was concerned. “Dad made it clear that you make it work. You do what you have to do. You also treat your store with the same respect as your home. My career and future is right here with the store”, Joe said.

Joe confesses that it is important to make sacrifices that keep him true to the commitments he has made to the store and to our community. Joe will carry on the distinctive family furniture business now serving its fourth generation of appreciative customers.